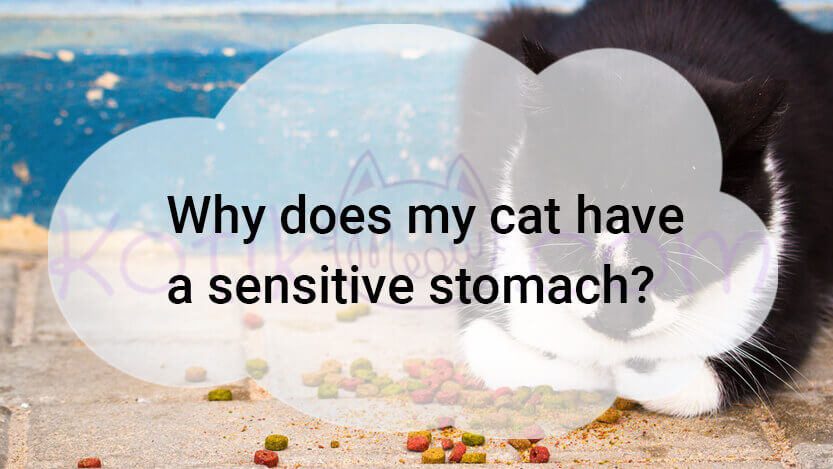 Many ask, why does my cat have a sensitive stomach, main problems that food allergies, food Intolerances, inflammatory bowel disease and other causes.

why does my cat have a sensitive stomach

Unfortunately, your cat can’t tell you when they are feeling poorly, but there are a variety of signs that will tell you that there might be something amiss with your cat’s digestive system:

4 main problems why has a sensitive stomachs in cats

Just like humans, cats can develop a dysfunctional or hyperactive immune system that can attack harmless chemicals in the body as a threat, causing an extreme reaction to mundane things, such as food. Cat’s can develop allergies out of the blue to foods that they eat regularly, especially foods that are high in protein such as beef, chicken, and pork.

One way to prevent this is to ensure that you give your cat a rotational diet that is not too heavy in any particular food source. Once the allergy has been developed, it is a matter of identifying the culprit and eliminating it from their diet completely.

This can be done with an elimination diet. This means feeding your cat a bland diet that causes no negative responses for a period of around a month and then slowly introducing other foods one at a time for a few weeks. When they start having a negative reaction, you know that you have found the problematic food source.

Different from allergies, in this case, the food is not digested and absorbed into the bloodstream and passes through the gut pretty much unchanged. This is less dangerous to your cat’s health, but still pretty unpleasant.

This is notoriously hard to diagnose and is usually the answer when everything else has been eliminated. This is caused by structural changes in the mucosa lining of the stomach, which changes your cat’s ability to digest certain nutrients.

Inflammatory bowel disease can lead to a leaky gut, allowing food particles, toxins, and bacteria to leach into the bloodstream. It is best to put them on a 12-hour fast and then put them on a bland diet, slowly introducing a wider range of foods.

Your cat might also suffer from parasites, which limits their ability to absorb nutrients, and should be treated with a parasite medication. A sudden shift in their diet can also result in a period of sensitivity, as can excessive hair in their digestive tract. If this occurs frequently, regular grooming can mean that they swallow less hair when grooming.

When looking for good cat food for sensitive stomachs, there are a number of important features to look for.

A sensitive stomach cat food should:

All of the cat foods on this list combine these features in different ways.

As well as finding food that meets the needs of your cat’s particular type of sensitive stomach, it is important not to create eating issues by feeding them incorrectly.

Excessive eating can be a major cause of cat stomach issues. Avoid this by ensuring that you exercise portion control, perhaps investing in an automatic feeder if you are not in the house to provide smaller meals.

Also, remember that a sudden change in a cat’s diet can cause stomach issues. Move them onto new food, including stomach sensitive food, gradually. Start by mixing 20% of their new food with 80% of their old food, and gradually change the mix over the period of a week or so.

Lastly, avoid treats. They are generally very rich, and only a small treat can throw off the balanced diet that you have invested in for your feline friend.

Write comment below to us about: Have ever be a cause of cat stomach issues on your cat? How did you treatment thet? What was the cause of sensitive stomachs in cats issues in your case? You asked yourself, why does my cat have a sensitive stomach?

How to Handle Feline Acne