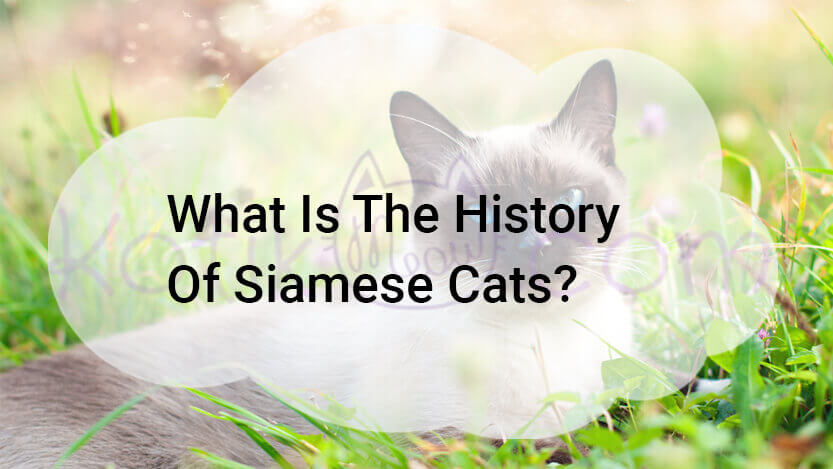 → What is the history of siamese cats?

Siamese are vocal and demanding but are also curious, affectionate and athletic.

Its short hair coat contains a mutated enzyme in its pigment that produces its cream-colored torso offset by darker points at the ears, face, and toes. The CFA recognizes four “points” or colors of Siamese: seal (black), chocolate (brown), blue (grey dilution of seal) and lilac (dilution of the chocolate). TICA allows more colors, including lynx and tortoiseshell.

Regarded as a healthy breed, the Siamese can be genetically predisposed to problems with gingivitis and a liver-destroying disease called amyloidosis.

You might wish this breed came with a mute button. Siamese are vocal and demanding, capable of conveying its wants in a range from mews to loud raspy calls. Siamese are also curious, affectionate and athletic. Their vocalization sounds like human baby cries. They love to be around their favorite people and tend to share your pillow at bedtime.

Highly intelligent, this breed can be trained to perform commands and tricks and has proven to be a viable competitor in feline agility.

Things you should know

Their coats darken with age.

Responsible breeding practices have bred out the cross-eyed and kinked tail tendencies.

One of the oldest and most recognizable cat breeds in the world, the Siamese traces its royal roots back to the 14th Century in Thailand when it was known as Siam. This elegant breed belonged to members of the Siam royal family who would bestow them to visiting dignitaries.

This breed began showing up in Europe and the United States by the late 1800s. The first known Siamese to reach American shores was a gift to First Lady Lucy Webb Hayes from the American consul in Bangkok in 1884. Siamese also enjoyed time in the White House during the Gerald Ford and Jimmy Carter presidencies.

Today, the Siamese ranks fifth in popularity among all breeds recognized by the Cat Fanciers Association, the world’s largest breed registry.

What are the different types of Siamese cats?

There’s actually a particular Siamese breed standard recognized by the Cat Fanciers’ Association. It comes in four colors: seal point, blue point, chocolate point, and lilac point. Points refer to the flashes of color on the face, ears, legs, and tail, and should have a sharp definition.

What are the three types of Siamese cats?

Siamese cats are classified into two main groups: Traditional and Modern. The Traditional group is further subdivided into 3 types: Applehead, Old-style, and Classic.

What health problems do Siamese cats have?

MEDIUM: While this cat breed is considered to be healthy with no notable genetic diseases, there are some problems common for Siamese cats:

Do Siamese cats meow a lot?

Yes they do, they are one of the cat breeds that is known for its talkative nature. The Siamese is a high maintenance cat that requires much time and attention. Their meowing has much to do with this personality trait.

Write comment below to us about What Is The History Of Siamese Cats? Do you have a Siamese Cat, write about it.