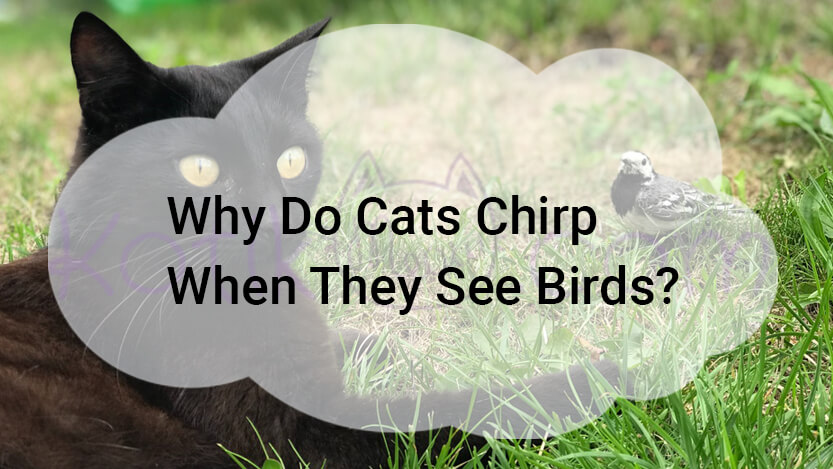 → Why do cats chirp when they see birds?

Yep, birds aren’t the only species who make chirping sounds. Cat chirping is yet another strange cat sound. So, why do cats chirp when they see birds? Let’s take a look.

If you were to tell one of your non-cat-owning friends that you overheard your cat chirping, he might look at you quizzically. After all, we all know that birds chirp and cats meow, right? But as anyone who’s lived with a feline knows, cats have a deep well of weird and kooky sounds that they use to express different feelings and desires — and cat chirping (or cat chatter, cat chattering) is definitely an ability hardwired into cats’ oratorial repertoires.

Why do cats chirp? And what exactly does cat chirping sound like?

You’re most likely to witness cat chirping when your kitty is standing guard at the window, staring out at a pesky bunch of birds or critters. The curious noise that comes out of your cat could be described as a high-octane version of a goat’s bleat. It often also has a few of those weird, rhythmic clicks mixed into it for good effect. As you’ve probably guessed at this point, cat chirping usually seems to occur as part of a feline’s esteemed hunting tactics.

What are the origins of cat chirping?

It’s been suggested that the origins of cat chirping come from kittenhood. One theory claims that cat chirping is a way for a mother to corral her clowder of kittens to follow her. It’s also said that cat chirping can be used in return by a kitten as an ear-catching way to get the mom cat’s attention.

Fittingly, cat chirping is a beguiling — and, let’s be honest, pretty darn hilarious — mix of excitement and frustration. So, think of it like the whines of the proverbial kid in a candy store trying to convince a parent to stump up for the sugary stuff.

Dont forget to subscribe!!! Talking to the city´s birds – our 3 super-cute Maine Coon´s favourite amusement. The main vocalist Flauschy is joined by his red …

Cat chirping definitely has a similarity to the sounds that birds make when they’re gleefully trilling away. But it isn’t meant to mimic the sound of a feline’s feathered foes. How do we know this? Because cats will also happily chirp away at squirrels and other potential meals. Sometimes cats will bring the chirping behavior into the homestead. You may hear it during play sessions with cat toys.

Okay, so why do cats chirp then?

Digging deeper, it seems that an element of frustration is key to understanding why and when cat chirping occurs. Out in the wild, a cat would spot, stalk and hunt his prey. But indoor cats are obviously scuppered by glass windows. The longer the feline stares at a bird she cannot put the moves on, the more the cat chirping increase.

Marilyn Krieger, a certified cat behavior consultant known as The Cat Coach and author of Naughty No More! suggests that cat chirping is “reflexive.” She adds, “[Cats] might chatter in anticipation of capturing the birds or maybe they’re frustrated because they can’t reach them through windows. Another theory is that cats chatter because they have a surge of adrenaline through their systems when they see potential prey.”

How should you react when your cat chirps?

So, how should you react when your cat chirps? Well, first of all, don’t worry: There’s nothing medically wrong with her. If she’s an indoor feline perched at the window engaging in some enthusiastic chirping, the dignified course of action is to obviously join in with her excitement, while also sympathizing with her frustration. Yep, chirp along with your cat like you’re in some sort of feline karaoke session.

Write comment below to us about why do cats chirp when they see birds? Your cat chirping?