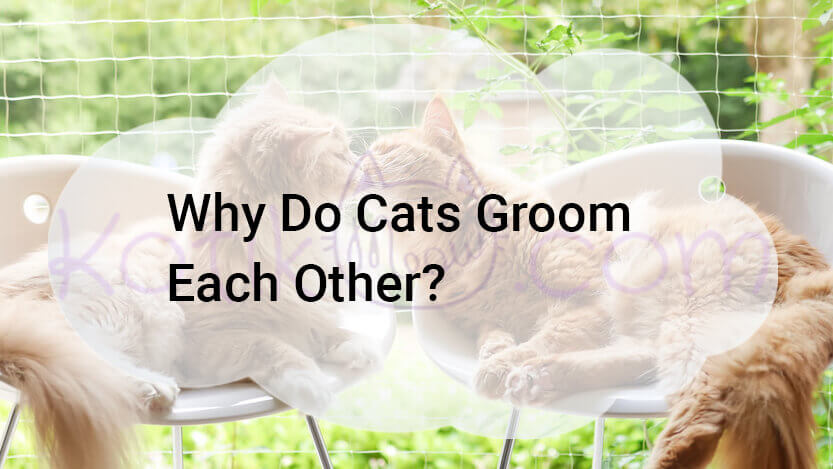 Why do cats groom each other? What does this behavior have to do with their big-cat cousins, maternal instincts, social bonding and hierarchies?

If you have multiple cats at home, you’ve probably seen it happen on occasion. When it did, you undoubtedly smiled and said “Aww!” Your parental pride was triggered as one cat started licking and grooming the other. So, why do cats groom each other? Let’s take a closer look at this behavior.

→ Why Do Cats Groom Each Other? Let’s Talk Allogrooming!

Before we start to answer the question, “Why do cats groom each other?” let’s learn about this feline behavior. Scientists call this adorable behavior allogrooming. But why do cats groom each other? Our human intuition tells us that this might be a sign of affection between our cats, but it’s not that simple. It’s complex enough that scientists have studied allogrooming behaviors in domestic cats, lions, primates and many other species.

In a 2016 study called Sociality in cats: A comparative review published in the Journal of Veterinary Behavior, researchers from the University of Bristol in the U.K. found that allogrooming is one of three ways cats express cohesion in colonies. The other two ways are allorubbing and transmitting scent signals.

In a 2004 study, Social organization in the cat: a modern understanding, researchers from the University of Georgia observed feline social interactions in free-roaming cat colonies. They noticed that allogrooming occurs among cats who already have a social bond. Cats outside the colony are not recipients of allogrooming unless they are integrated into the colony. In other words, cats are not going to groom another cat they don’t know, which makes total sense. But there’s more to it than that.

The researchers observed that recipients of allogrooming are usually highly cooperative, will tilt and/or rotate their head to provide access to the groomer, often while purring. Cats might solicit allogrooming from another cat by approaching the other cat, flexing their neck, exposing the top of their head or back of their neck. This happens to be part of their bodies that cats cannot easily groom themselves, so this solicitation could be motivated by a practical need for help in the bathing department.

Another interesting point to think about when asking, “Why do cats groom each other?” The researchers also observed that cats who have a closer bond usually engage in allogrooming and that it may or may not be reciprocated. They gave one specific example of a female cat with two of her adult offspring. Each cat groomed the other two cats over the course of several minutes and took turns helping each other out with their bathing needs.

We can better learn how to treat our own cats by understanding allogrooming among colony cats, because these relationships are transferred to their relationships with humans. So when we pet and scratch our cats’ head and neck, we are in a sense grooming them in an area where they typically groom each other. You may have noticed that cats like it when their human pets them on the head and neck. But we also pet cats on other areas of their bodies that aren’t typically groomed during allogrooming. This could be a contributing factor in petting-induced aggression, the researchers concluded.

It Has To Do With a Higher Rank?

A 1998 British study from the University of Southampton called The function of allogrooming in domestic cats (Felis silvestris catus) also noted that allogroomers generally groomed the head and neck area. These researchers also observed that higher-ranking cats groomed lower-ranking cats more than the other way around. Allogroomers also took higher postures, that is, standing or sitting upright, while allogroomees were sitting or prostrate.

Another thing to consider when thinking, “Why do cats groom each other?” When kittens are born, they are met with their mother’s tongue. Kittens rely on their mothers for everything, including bathing. This behavior is both a sign of affection and protection from their mothers.

Queens clean their babies immediately after they are born, because the smells associated with birth could draw predators. By the age of 4 weeks, kittens are able to bathe themselves, and they’ll spend as much as 50 percent of their lives keeping themselves clean.

So, Why Do Cats Groom Each Other?

Judging from the research, it appears to be a sign of social acceptance and connection. Cats neither groom nor solicit grooming from strangers. Because it’s usually to the head and neck, a part of their bodies they cannot reach themselves, allogrooming could be motivated by a practical need for help with bathing.

Cats learn the behavior from their mothers, so maternal instinct likely plays a role. Allogrooming might even show social hierarchy — dominance for the allogroomer and submissiveness for the allogroomee. Even if allogrooming is motivated by aggression, it’s tempered by a social bond reserved for friends and family.

Write comment below to us about: Have you ever seen Do Cats Groom Each Other? How did you treat do?