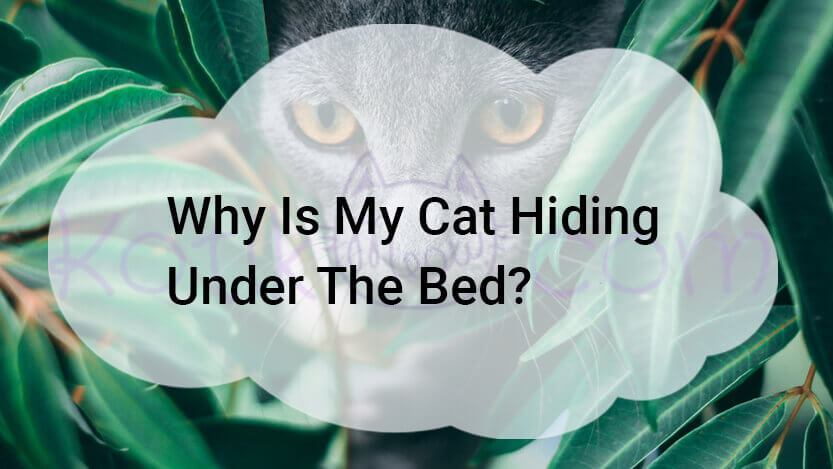 Hiding is a common and oftentimes just silly and normal cat behavior. So, why is my cat hiding under the bed? Does cat hiding ever indicate something serious?

→ Why is my cat hiding under the bed?

When pet talk show personality Tracie Hotchner appeared on the Martha Stewart Show, Martha Stewart brought her newly adopted cat to co-star in the segment. These days, Tracie is the founder of the Radio Pet Lady Network, but at the time, she had a show on Stewart’s Sirius radio channel. Unfortunately, when it came time for the cameras to roll, the feline guest of honor had seemingly disappeared. “Then, they looked on the bookshelf and found the cat squeezed between two of Martha’s cookbooks!” says Tracie with a laugh. If you’re a cat parent, you’ll probably relate to Tracie’s anecdote about cat hiding.

Cat hiding at a glance

When it comes to hiding, our felines are so skilled that you often become convinced your beloved kitty has magically vanished — only to eventually find her nestled in the nook of a cupboard, perched up high above the kitchen cabinets or stealthily staking it out under the bed. But why is your cat hiding? And is it an issue if your favorite feline is indulging in hiding behaviors a little too often?

Why is your cat hiding?

When discussing cat hiding, Tracie relates it to a feline’s place in the animal food chain. “Cats are fearful ‘prey’ animals,” she says. “Almost any noise or new person or other animal or moving furniture can be stressful and drive them to hide.”

Hotchner’s characterization rings true for me: Every time the apartment doorbell sounds for delivery, my cat, Mimosa, scurries along and hides under the bed like the end of the world has just been announced. Mimosa has never experienced any harm or distress as a direct consequence of the doorbell sounding — but it seems that the newness of the noise, which she cannot pinpoint as originating inside the apartment, sparks some cat hiding instinct. The fear of the unknown can make us all act in strange ways.

What are some preferred cat hiding spots?

A common way cats hide is to box themselves in somewhere, like at the back corner of a closet. A couple of years ago, I was talking to John Bradshaw, a cat science expert and author of Cat Sense, about why cats seem to pick such boxed-in places as hiding spots. He told me that out in the wild, felines are constantly searching for “nooks and crannies to rest in because what they want is to basically have five sides out of six protected.”

This is one reason why cardboard boxes are such a popular cat hiding spot. “For five sides out of six nobodies can get at you and you can keep an eye on the sixth one,” Bradshaw says.

When bringing newly-adopted cats home, they often use a form of Bradshaw’s math. The standard advice to prevent cat hiding is to set up a small room — like a bathroom or utility closet — and make sure that room has all the cat’s essentials like food, water and a litter box.

Then, leave the cat alone in the room and let her get accustomed to part of her new environment at her own pace. But if you peek in, you’ll often see the cat hiding somewhere within the room itself, too.

With my cat, Mimosa, she took up a hiding position under the sink cabinet — presumably to try and achieve Bradshaw’s goal of safely boxing herself in as much as possible while still being able to spot any advancing intruders.

Is it a sign that something is wrong with cat?

In Mimosa’s case, her bout of cat hiding didn’t last long. After leaving the bathroom door ajar, she eventually sauntered out around midnight to explore her forever home properly. These days, she occasionally enjoys hiding out in the closet where the coats and winter boots are kept.

While it’s natural for cats to retire to a preferred hiding place every so often — and this happens more during the heat and humidity of summer when they seek out dark spots to cool down — look out for significant increases in cat hiding behaviors that seem less like sneaking in a little quiet respite and more like a sign of withdrawing.

“Knowing your own cat’s habits will tell you whether the hiding is a physical problem or an emotional one,” says Tracie. If your cat usually reveals herself from her hiding place at the shake of the treat bag but starts to ignore the call, you might want to consider whether something is amiss.

Just be mindful of what Tracie says: “the number one skill needed to be a cat guardian: patience.” Never try to force a cat out of hiding. Instead, let your cat “come out in her own good time” and respect your cat’s favorite hiding tactics.

Write comment below to us, does your cat hide? What are some of the craziest cat hiding places you’ve seen? What scares your cat the most?