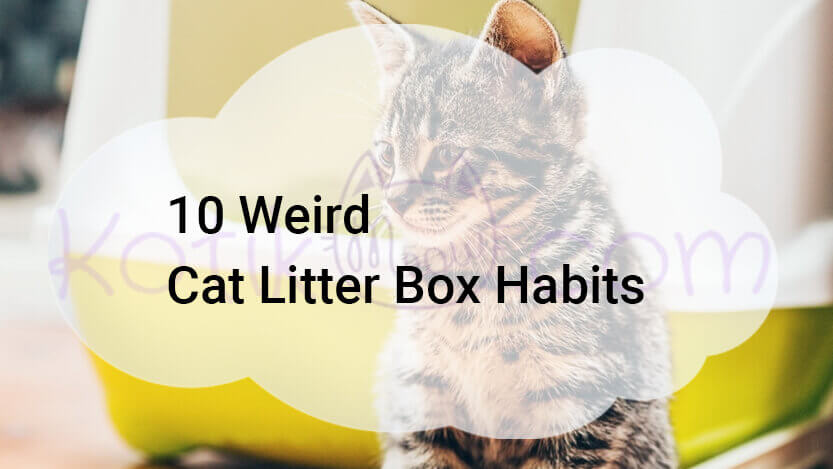 Over the years, I have seen some bizarre behaviors when it comes to cats and their litter boxes, some of them downright comical. So, in the spirit of David Letterman’s Late Show Top Ten list, here’s my countdown to some of the strangest cat litter box habits I’ve seen:

There are some bizarre behaviors when it comes to cats and their litter boxes. Here’s a countdown to some weird cat litter box habits.

1. Sleeping in the clean box

My friend Linda has a cat named Gallway, who very recently started sleeping in a newly scooped litter box. Linda put the box in a new place — at the end of a quiet hallway. Gallway climbed in and promptly went to sleep on top of the clean litter. The litter box was his sleeping spot for two days and nights, and he only decided to sleep elsewhere when one of the other cats used the box for its proper intention.

2. Rubbing against the outside of the box

I see this behavior most when a brand-new litter box is set up. After setting the new box down, a few of my cats tell the box they love it, by rubbing their faces all over the sides. Of course, they don’t actually love the box — they’re claiming ownership of the box by covering it with their scent.

3. Peeing on the sides of the box

My girl Pinky pees like a boy kitty. The lady kitty-squatting position is just not for her. Pinky enters the box, backs herself into the corner and, while standing, lifts her tail and lets it fly! I need to have some lidded boxes — if I don’t, she’d be peeing straight back against the wall.

4. Using separate boxes for each “mission”

I always tell people that even if they have only one cat, they need two boxes. Odd as it sounds, some cats prefer to use one box to pee and a different box to poop. The reason why is a mystery, so just go with the flow, and give your cats more than one litter box.

Ever walk into the room and discover your cat didn’t bury his poop? Yes, cats are fastidiously clean, but sometimes that poop just doesn’t get covered. But it’s not that he forgot — he is actually sending the other cats a signal of his dominance. My alpha cat Boo-Boo is famous for this, and sometimes another of my cats will go in behind him to bury it for him. Strange but true.

6. Running away from the box

The other day, I was upstairs in the bonus room, when Simba came into the room to use the litter box. Simba did his business, then ran tearing through the room, running away from the litter box at full speed. He is not the only cat I have seen do this. Hysterical yes, but why did he do that? My theory is that this behavior is reminiscent of a cat’s natural instinct to keep waste away from his living space in order to throw predators off the track and keep disease away from the colony.

I see this every now and then when my alpha cat Boo-Boo decides to show his authority over the other cats or when a new cat enters our family. The dominant cat will in effect trap another cat in the litter box, by coming to him when he’s in the box with his head down in that intimidating stance cats get when trying to put another cat in his place.

8. Hiding in the box

When I rescued my Rosie, she had come to me from two different homes — one of neglect and one of unintentional bullying by the resident children and dogs in the home. The first thing she did when I brought her home was hide in the smallest covered litter box I had. Why? The small space made her feel secure and safe, so the other cats left her alone in there. It took me a week to get her out of the box and another few months before she would come out of the litter room closet.

9. Playing in the box

I used to take care of a cat named Brotha. Without fail, whenever I would go to scoop his litter box, he would rush over to the box, jump in and begin rolling around in the box before I even scooped it. It was hilarious! My late Abby would do that when I changed out the litter. As soon as the fresh litter was inside the box, she would start rolling around on her back with glee.

Did you know pooping is a group activity? Just ask a group of kittens, and they’ll tell you. Once little kittens start using the litter box, they tend to all use the box together. While most cats grow out of this, my friend Linda’s cats Kizzy and Karma still visit the box together. Karma will wait outside the box for Kizzy while he’s doing his thing. They are so much in love with each other that everything they do is a cat couple activity.

Now that you know the litter box is for more than just its intended purpose, you may start to notice some of these behaviors in your own cats. Their antics will be sure to make you laugh.

Write comment below to us about weird cat litter box habits in your case. How did you feel about them?

Why Do Cats Groom Each Other?

Why Is My Cat Hiding Under The Bed?