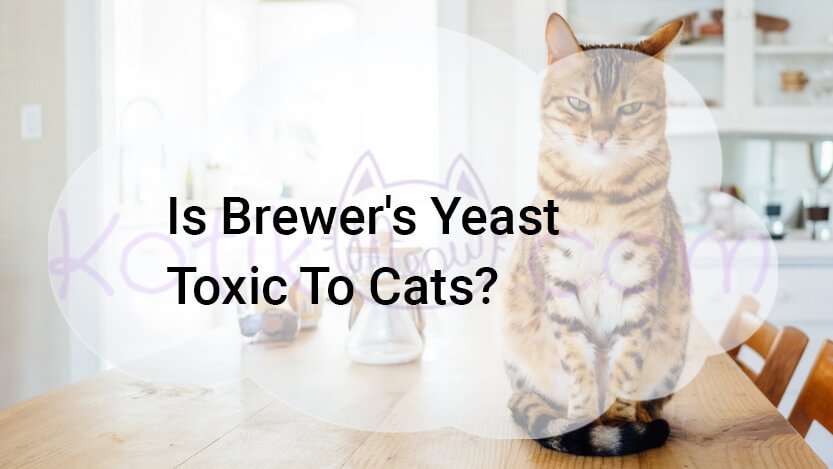 Although its use in pets has been controversial, brewer’s yeast is a popular nutritional supplement for both cats and dogs. Brewer’s yeast for supplements is grown on molasses and sugar beets. Medicinal herb expert C.J. Puotinen says S. cervisia yeast, a strain of which is used to make beer, is found in pet supplement form. It’s far more nutritious than the by-product breweries sell after using yeast to ferment their beers. Have questions about is brewer’s yeast toxic to cats?

The University of Maryland Medical Center says that brewer’s yeast is an excellent source of both B vitamins and the minerals chromium. B vitamins play an essential role in the health of your cat’s skin, coat and eyes. They facilitate fat, protein and carbohydrate metabolism to keep kitty’s energy levels up, and support both his liver and nervous system. Diane Stein, in Natural Healing for Dogs and Cats, says that commercial cat food may be lacking in vitamin B1. Severe vitamin B1 deficiency can cause seizures, lack of motor coordination and even death. She also recommends chromium to regulate blood sugar in diabetic cats.

Although some holistic vets, including Dr. Richard Pitcairn, recommend daily supplementation with brewer’s yeast and garlic as a way to keep fleas from infesting your cat, a 1983 UC Davis study found that giving dogs 14g of brewer’s yeast each day for 5 weeks neither repelled nor killed fleas.

Many cats are allergic to brewer’s yeast. If your cat starts scratching or showing other signs of an allergic reaction, stop giving her not only the brewer’s yeast but all yeast-containing products.

Kinds of Brewer’s Yeast for Cats

Brewer’s yeast for cats is manufactured as a liquid, in tablets and powder. Any of them can be mixed with your cat’s food. C.J. Puotinin advises that if you want use brewer’s yeast as a flea repellent, look for high sulfur content, which may be unpalatable for fleas. High-sulfur brewer’s yeast is grown on molasses.

The Tree House Humane Society recommends a dose of 1 tsp. of brewer’s yeast per day for your cat. If you’re using a commercial tablet or liquid, follow the dosing instructions on the package.

→ Is Brewer’s Yeast Toxic To Cats?

What is Brewer’s Yeast Allergy?

Brewer’s yeast is a by-product of the beer brewing process which can be toxic to dogs and cats. Its toxicity can stem from the animal’s sensitivity to yeast in general or, more importantly, from the preparation of brewer’s yeast for commercial and consumer use. This yeast is grown on malted barley and this gives it a bitter taste. While brewer’s yeast is known to be a great supplement for B vitamins in humans, it is not so healthy in cats due to ingredients added to make it more palatable.

Brewer’s yeast is a by-product of the beer brewing process and, because of ingredients put into it when commercially prepared is toxic to dogs and cats, even to the point of being fatal.

Symptoms of brewer’s yeast allergy in cats can relate to a sensitivity to yeast products in general or to the additives in the product for commercial and consumer use. Though dogs and cats are both susceptible to this toxicity, cats are more sensitive to it.

Symptoms related to yeast allergies in cats can include:

Additional symptoms of allergies/toxicity to ingredients:

The Types of Brewer’s Yeast Allergy in Cats

Most cats will benefit from nutritional yeast additives in their diets as this product is rich in vitamin B and is great for the skin and coats – if the feline is sensitive to yeast in general, adding brewer’s yeast will further exacerbate that sensitivity. Small amounts of yeast organisms are present under normal circumstances on the skin of cats and aren’t generally a problem until something else upsets the immune system balance or allows those organisms to proliferate abnormally.

Since the brewer’s yeast causes it to be more bitter and generally less palatable, many manufacturers of brewer’s yeast add other ingredients to help the taste. One of those additives is garlic and this is the toxic substance which can be fatal to your cat.

The main toxic ingredient in Brewer’s Yeast is added garlic. Garlic (allium sativum) is from the Liliaceae family and is considered toxic to cats, dogs and horses. The toxicity comes from N-propyl disulfide which is an oxidant that is known to cause wreak havoc on the red blood cells.

This damage occurs when:

Diagnosis of brewer’s yeast allergy will be determined primarily by lab testing. Your complete history will be needed by your veterinary professional which needs to include the food and any supplemental foods or pills, powders or liquids being offered to your cat. Your veterinary professional will need to do a physical examination and will likely need to order some laboratory testing. He will need to get blood and tissue samples for lab evaluation. He will be ordering blood tests to determine if hemolytic anemia is present.

He will also need the results of blood smears which will identify Heinz Bodies to indicate oxidative toxicosis. Radiographic imaging (x-rays) may be required to assure the correct diagnosis as hemolytic anemia can be a cause of other conditions or diseases. Your veterinary professional will assess and evaluate the blood panels and the x-ray results to ascertain the appropriate diagnosis of the malady of which your feline is suffering and will develop the appropriate treatment plan.

The standard treatment for brewer’s yeast allergy in cats is very to the point in that you must eliminate yeast, garlic (and onions, too) from the diet. Check the ingredients in the brewer’s yeast you are feeding your cat and, if it contains garlic or onions, stop immediately. Also, if your cat has a history of snacking on onions and garlic, discontinue this as well.

Since the bone marrow’s basic function is to make new red blood cells and because it has been doing that throughout the allergic/toxic episode, once you discontinue the toxin (garlic, onion or brewer’s yeast in which these are ingredients), then the hemolytic action will stop and, over time, the red blood cells will be replenished to a normal, healthy level. The veterinarian will provide clinical therapy as required; if fluids for vomiting and diarrhea, or topical ointments for skin irritation are needed, these will be prescribed and may be continued for home use.

Beyond that, supportive care which includes keeping your pet quiet and calm is needed. Do all that you can do to achieve calmness in your pet as any excitement or unnecessary activity can cause your pet to need increased oxygen which the body can’t supply due to the decreased red blood cells and may lead to fainting from lack of oxygen. Also, be sure to offer plenty of good, healthy food options which don’t include onions, garlic or brewer’s yeast.

The prognosis for recovery from this toxicity is good provided the toxicity was not too great. In the event that your pet was found to be severely anemic, then you should expect that blood transfusions may be required to provide adequate oxygenation while the bone marrow replenishes the red blood cells which have been damaged or destroyed.

If your pet has suffered from even the sensitivity to yeast versus the allergic symptoms, it would be prudent not to feed brewer’s yeast to your feline to reduce the opportunity for the toxicosis or yeast infection to repeat itself. If your pet has a yeast sensitivity, it is likely that you will have to find other means to supplement his diet to get the nutrients that are available from even the nutritional varieties of yeast products, which are many to be sure.

15 Cat Skin Problems on the Body

Why Is My Cat Covered In Scabs?