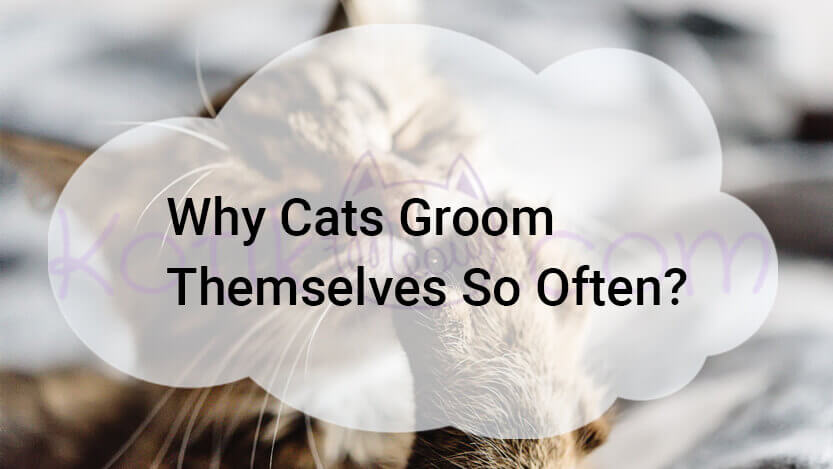 Quite a few pet owners choose cats over dogs because “cats are so clean.” And it’s true: a normal cat can spend as much as 50% of their waking time grooming itself (or another cat). As a result, cats are typically very clean animals, though in some cases grooming can become a form of obsession. Cats groom themselves?

→ Why Cats Groom Themselves So Often?

Clean from the Start

Kittens, emulating their mothers, start self-grooming by the time they’re a few weeks old. If they are part of a litter, they are likely to lick and groom one another as well.

Outside of simple cleanliness, grooming has a number of purposes. Here are some of the most important.

Cats wash their injuries to cleanse the wounds, and possibly to prevent infection. Licking with a rough tongue can also remove dead skin cell.

To Hide Scent From Predators

Cats’ sense of smell is fourteen times more powerful than that of humans. Most predators, including cats, track prey through scent. A mother cat in the wild will try to hide her young kittens by removing evidence of their feeding. She will wash herself and them thoroughly after nursing. For the same reason, cats will bury uneaten dead prey in the wild. You may observe that same instinctual behavior when you see a cat scratching at the floor around the food dish after eating.

To Groom and Lubricate the Coat and Skin

When cats groom themselves, their barb-like tongues stimulate the sebaceous glands at the base of their hairs and spread the resultant sebum throughout the hairs. Their self-grooming also helps rid the coat of dirt and parasites such as fleas. Further, since cats do not have sweat glands, their saliva somewhat helps them cool down on hot days.

Grooming feels good, and cats do seem to groom just because they enjoy it. They will also groom one another (and their human friends) out of what certainly appears to be a desire to share a positive sensation.

When Cats Groom Themselves Becomes Obsessive

Grooming to excess can become an obsessive-compulsive behavior which can lead to bald patches and skin sores.

Cats’ over-grooming is often caused by stress and may be likened to humans’ habit of biting their nails to the quick. Cats, in general, intensely dislike change of any kind. A new baby, a death in the family, even the rearranging of furniture, could be the trigger for this obsessive grooming. Physical causes might include flea bites or ringworm, so it is necessary to rule those out before diagnosing a stress response.

Cats who were taken away from their mothers at a very early age were not allowed the normal weaning period, and will often self-groom by licking or sucking. This behavior will usually lessen and disappear over time when the kitten is kept in a safe and predictable environment.

Write comment below to us about cats groom themselves in your case. Have cats obsessive behavior in your case?