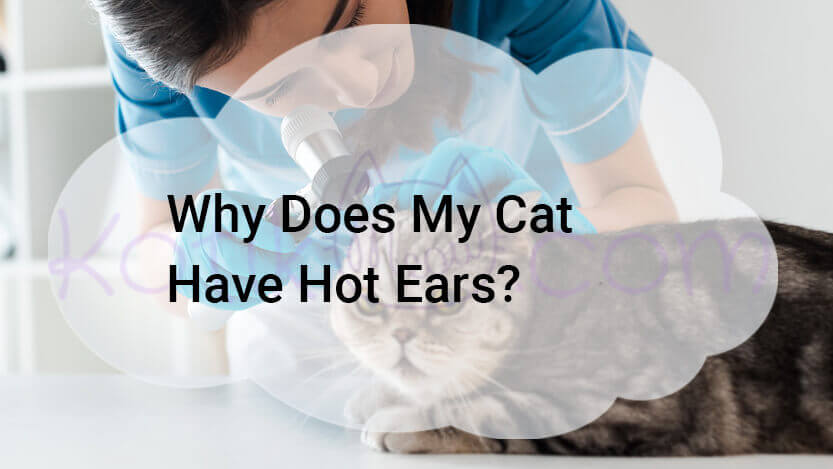 Thinking, “My cat’s ears are hot — is it normal?” You’re not alone. Find out what hot cat ears mean for your feline’s health.

→ Why Does My Cat Have Hot Ears?

Ever thought something along the lines of, “My cat’s ears are hot — is he sick?” Anthropocentric creatures that we are, humans tend to assume, regardless of context, that our own baseline experience of the world is some kind of universal standard, and that any deviation from it is strange, problematic or worrisome. For example, in an idle moment of couch-sitting, you’re petting your beloved cat and start mindlessly fondling the cat’s ears. Suddenly, you’re thinking, “Man, my cat’s ears are hot!” You’ve never really noticed that before, and now those hot cat ears are all you can think about.

No cat owner or fan of cats would dare to deny it. A cat’s natural body temperature is several degrees hotter than any human’s. Anything up to 102.5 degrees Fahrenheit (39.2 degrees Celsius) is considered normal. When playing with cat ears, you are bound to make note of the contrast between what you consider normal and what is typical for the cat. So, if you’re sitting here wondering, “My cat’s ears are hot — is it an issue?” let’s take a closer look.

Facts On Cat Ears and Temperature

The first thing to know when thinking, “My cat’s ears are hot” — the temperatures of cat ears fluctuate based on the animal’s surroundings, which is perfectly normal. Unlike most of the surface area of a cat’s body, cat ears tend to be thin and exposed, protected by neither a great deal of fur nor by body fat. Their noses are also notoriously changeable.

During warmer times of the year, vasodilation increases blood flow to these areas, the better to release excess heat from the body. During colder periods, vasoconstriction does the opposite to conserve heat. You may think that indoor cats are subject only to the whims of the thermostat, but any cat perched near a window in the daytime is going experience a temporary hike in both ear and nose temperature.

If we look to colorpoint breeds like the Siamese, we can see that our baseline perception of warmth is very different to that of our cats. For these breeds especially, their experience of heat is written on the body. You may know that the unique coat markings of color-pointed cats are expressions of a form of partial albinism, and that all specimens of these breeds are born with white coats. The patches of color develop as these cats mature, and are darkest at the coolest parts of its body, typically the ears, nose and tail.

Do Those Warm Cat Ears Mean Your Cat Has a Fever?

Some humans might immediately think, “My cat’s ears are hot — does my cat have a fever?” Are cat ears reliable gauges for a cat’s general health? In cats, even a standard fever, from 103.5 degrees Fahrenheit (39.7 degrees Celsius) and upwards, is usually nothing to worry about in the short term. The heat increase experienced during a fever is the body’s natural way of fighting infective agents, like viruses or bacteria, and kickstarts the immune system into action. A cat with a “normal” fever will seek to isolate herself in a cool place — unlikely to be your lap — and remain still with her body splayed out rather than curled up.

If a cat’s ear temperature is a source of concern, feel the stomach and underarms. If they, too, are hot to the touch, the cat may have a fever, since a cat with a true fever will experience increased temperature across the entire body. Seek veterinary attention if you observe extreme total body heat for more than two days consecutively. If this describes your cat’s current conditions, you’ll probably have noticed a number of related signs and symptoms, any of which will be more telling than ear temperature alone.

Related: 4 Cat Ear Problems and How to Treat Them

Most cat owners spend enough time with their cats to be familiar with their routines. Is the cat eating less, or not finishing her food with her normal alacrity? Does her heartbeat seem quicker than usual? Is she not only hot, but also shivering? Any combination of these symptoms points more conclusively to a potentially dangerous health issue.

If your cat has experienced feverish conditions four or more times over the course of two weeks, the cat may have what is referred to as a fever of unknown origin. Make careful note of any and all changes — behavioral, physical and otherwise, including the first time you noticed hot cat ears. That way your vet can begin the difficult process of identifying the problem.

Wondering, “My cat’s ears are hot — does he have any sort of ear problem?” Where cat ear health is concerned, there are always more obvious signs of disorder and disease than hot cat ears. The most common cat ear issue is otitis externa, or an infection of the outer ear. Cat ear infections are most frequently traced to two sources, ear mites and yeast infections, with mites being the problem in the majority of reported cases.

Ear infections may present with ears that are warmer than normal. But this can be attributed to the cat paying them more attention than usual. Abnormal amounts of scratching at an ear with paws, or intently rubbing them against furniture, will necessarily raise their temperature and cause reddening. Whether the source of the infection is mites or yeast, these microscopic organisms wreak havoc only when conditions are optimal.

Excessive buildup of ear wax reduces ventilation and raises the internal temperature of the ear canal. The pinna, or the outer part of the ear that you see and touch, may become warmer as well, but it is the heat inside that permits mites and fungi to flourish. Symptoms of an ear infection more alarming than warmth include dark-colored discharge and a strange, pungent smell.

Bottom Line: Don’t Be Stressed If You’re Thinking, “My Cat’s Ears are Hot!”

Cat ears are fascinating organs. Heavily muscled in spite of their delicate appearance, each is capable of moving and turning independently of the other. Subject to the vicissitudes of their environment, the external temperature of the pinnae varies wildly. A cat can have warm ears one hour and cool ones the next.

If the heat emanating from one or both cat ears is a cause for concern, don’t panic. Look to the whole cat before you call the vet. Discoloration in and around the ear canal can alert you to serious issues, along with marked shifts in behavior and unusual odors.

Write comment below to us about why does my cat have hot ears? Can you tell if a cat has a fever by feeling its ears?

Scabs on Cats How To Cure Them Safely?

My Cat Has Dandruff Should I Worry How Treat It?