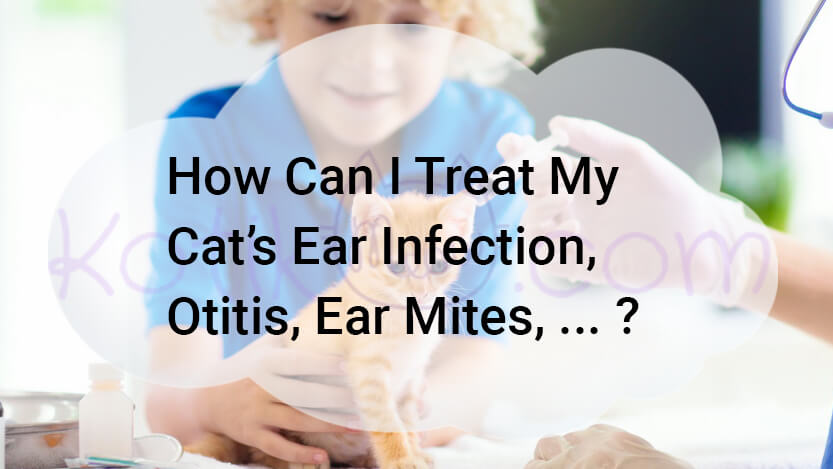 From ear mites to otitis, ear polyps to malignant tumors, we take you through four cat ear issues and how to treat each of them.

→ How Can I Treat My Cat’s Ear Infection At Home?

When people shake their head, they’re usually trying to say “no.” When cats shake their heads, however, it usually means, “My ear is bugging me.” Cats have a limited way of showing that their ears are bothering them. Headshaking is one way. Equally common is scratching. Most affected cats will use a back paw to scratch at their ear(s), sometimes vigorously enough to cause abrasions to the ear and the surrounding skin. We’ve found four cat ear problems from ear mites in cats to malignant tumors and how to treat them. After reading this article you will receive an answer how can i treat my cat’s ear infection at home?

Otitis is the medical term for inflammation of the ear. A common cause of otitis is a bacterial infection. Cat ear infections aren’t as common as they are in dogs, but they do occur. Most of the time, the infection occurs as a result of some other disease state or predisposing factor.

For example, skin allergies are a common underlying cause of ear infections in cats. Two common causes of skin allergy in cats are food allergy and atopy (allergic reaction to inhaled allergens like pollens). These allergies cause the skin to become inflamed, and that includes the skin inside the ear canal. Once the ear skin becomes inflamed, bacteria (and sometimes yeast) that normally reside in the ear can overgrow, causing an infection. The inside of the ear may become red, and a foul-smelling discharge can develop.

Diagnosis is usually made during physical examination. Treatment involves administering antibiotics, usually both topically (into the ear itself) as well as orally. Culturing the ear discharge to determine exactly what species of bacteria is infecting the ear improves the chance of successful treatment; however, the predisposing cause must also be addressed to minimize the chances of recurrence.

A very common cause of cat ear discomfort is ear mites. These pesky little parasites live inside the ear, feeding on the wax, oils and skin debris normally present in the ear canals. Although adult cats can be affected, ear mites are much more common in kittens, especially those who come from multi-cat environments like shelters and catteries.

Cat ear mites are intensely itchy, and kittens often violently scratch one or both ears with their hind feet, sometimes causing small skin wounds around the base of the ears.

Diagnosis of cat ear mites is fairly easy. Affected cats develop a characteristic dry, crusty black ear discharge that has been described as resembling “coffee grounds.” Evaluation of a sample of this crusty material on a microscope slide usually reveals the presence of live ear mites.

Treatment of cat ear mites involves administering some type of medication that kills the mites. Some of these medications are meant to be administered directly into the ear, while others are applied topically to the skin between the shoulder blades. Although both are effective, cats hate having anything instilled into their ears, and treatment can be messy. Topical veterinary products may develop additional clinical signs such as a head tilt and/or an uncoordinated gait.

Diagnosing of a polyp is usually achieved by directly visualizing the polyp in the ear using a handheld otoscope, similar to the one that physicians use to look into human ears. Some cats resent this and require sedation for proper evaluation. Treatment consists of surgical removal. Polyps, by definition, are attached by a thin stalk. If the stalk is removed along with the polyp, it is unlikely to recur. If, however, a small piece of the stalk is left behind, there’s a good chance it will regrow in a few months. To minimize the chance of recurrence, a more complex surgery called a ventral bulla osteotomy is recommended. This surgery requires the skill of an experienced veterinary surgeon.

Malignant tumors of the cat ear canal are uncommon, but they certainly can occur, usually in older cats. At my feline veterinary hospital, our beloved hospital cat, Topeka, developed a malignant tumor called a squamous cell carcinoma in her left ear canal. Despite surgical removal and post-operative chemotherapy, she eventually succumbed to this cancerous tumor a few months later, at the age of 15.

Most cats go through life without experiencing any ear problems; however, be aware of the signs that something might be aurally amiss in your kitty. Fortunately, most feline ear disorders are readily treatable and have no lasting effect on your cat.

Write comment below to us about how can i treat my cat’s ear infection? Did your cat have ear problems?

How To Treat Feline Acne?

Why Does My Cat Have Chin Acne?

What Can I Give My Cat For Urinary Problems?